All Events  ›  AGAINST THE GRAIN 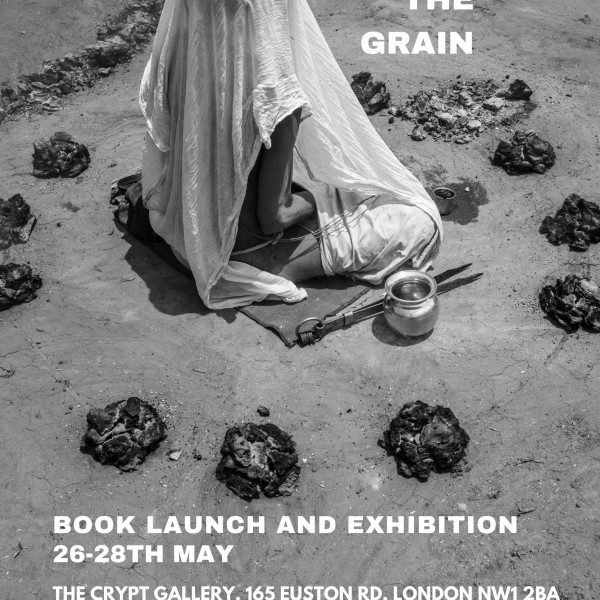 Free and open to all

UTKRĀNTI PRESS proudly invites you to the exhibition and book launch of AGAINST THE GRAIN. The exhibition will be an underground Temporary Autonomous Zone (TAZ) at the vaults of St Pancras Church, also known as The Crypt Gallery. On this occasion, accolades of this new underground order will be offered holy-communion through a multimodal exhibition of material culture, i.e;. photographs, ritual-objects, sounds recordings, movie pictures and subversive story-telling. The opening night, on May the 26th at 19:30, will be graced with an introduction by Prof. Chris Dorsett from the Pitt Rivers Museum – Oxford. Announcements will be made with regards to other activities.

Printed in duo-tone (black + black) by Empress Litho in London,
Against The Grain is a limited edition, 144 page hardcover book printed on the finest Italian paper available to humanity. Its large size (228x309mm) bulkiness, and thread sewn binding is particularly attractive for those with a refined taste. If it sparks joy then, my Friends, partake in this spiritual-materialism that can only lead to liberation and hoard it, buy copies of Against The Grain for your friends, partners, lovers and enemies.

Bio:
Prema Goet is a multi-disciplinary researcher whose main interest lies in the intellectual history, culture and languages of South Asia. He received his BA in Sanskrit and MA in Philosophy and Religion from The School of Oriental and African Studies (SOAS) – University of London. He is currently a visual-anthropologist researcher for The Śākta Traditions Research Project at the Oxford Centre for Hindu Studies. His interest focuses mainly on the performative ritual practices of various ascetic groups of South Asia. He has extensively worked with various practitioners from the region (India, Nepal and Bangladesh), documenting and producing a vast array of ethnographic works on tantric rituals, worship of the Goddess(es), aghora and yogic practices, etc. Amongst other things, Prema has also produced and recorded various audio-recordings of traditional chantings and music performed by the various groups he has worked with.

Prof. Chris Dorsett is an artist whose career has been built on curatorial partnerships with collection-holding institutions. In the UK he is best known for a sequence of exhibitions held at the Pitt Rivers Museum between 1985 and 1994. His many overseas projects include museum ‘interventions’ across the Nordic region and fieldwork residencies in the Amazon and at the walled village of Kat Hing Wai in the New Territories of Hong Kong. He has written extensively about the interface between experimental art practices and the museum/heritage sector. His publications include: ‘Exhibitions and their prerequisites’, in Issues in curating: Contemporary art and performance (2007); ‘Making meaning beyond display’, in Museum materialities: Objects, engagements, interpretations (2009); ‘Things and theories: The unstable presence of exhibited objects’, in The thing about museums: Objects and experience, representation and contestation (2011); ‘The pleasure of the holder: Media art, museum collections and paper money’, in the International Journal of Arts and Technology and ‘Studio ruins: Describing unfinishedness’, in Studies in Material Thinking (both 2018).