All Events  ›  The Man Who Wasn’t There

The Man Who Wasn’t There 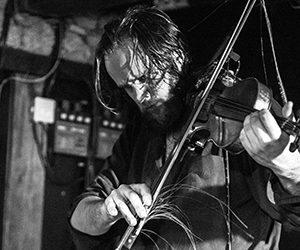 From Melbourne, Australia, Andrew Watson (aka The Man Who Wasn’t There) is a multi-instrumentalist who performs both as a solo musician & as a member of a number of bands. He weaves violin, guitar, noise & loops into a live instrumental soundtrack blending post classical, post rock & improvised styles. The Man Who Wasn’t There has performed in venues ranging from small bars to exotic & opulent spaces such as Melbourne’s Royal Exhibition Buildings, The Royal Observatory in Greenwich, London & Panjim Beach in Goa, India.

This event is part of the Bloomsbury Festival 2016.

This year’s Bloomsbury Festival takes place between 19 and 23 October. Events inspired by the theme of LANGUAGE, from computer code to the language of food, music and dance, will be popping up in the streets, parks, museums, galleries, laboratories, public and usually private buildings of this vibrant part of London.