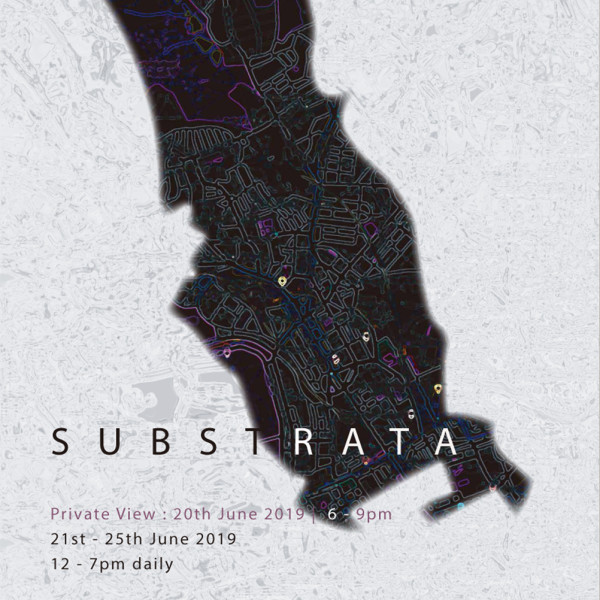 Open: 21-25 June 12-7pm
Private View: 20 June 6-9pm
Substratum in British
noun plural -strata (-ˈstrɑːtə, -ˈstreɪtə)
Any layer or stratum lying underneath another, a basis or foundation; groundwork, the non-living material on which an animal or plant grows or lives
Geology – the solid rock underlying soils, gravels, etc; bedrock, the surface to which a fixed organism is attached
Sociology – any of several subdivisions or grades within a stratum
Photography- a binding layer by which an emulsion is made to adunhere to a glass or film base sometimes shortened to: sub
Philosophy – substance considered as that in which attributes and accidents inhere
Linguistics – the language of an indigenous population when replaced by the language of a conquering or colonizing population, esp. as it influences the form of the dominant language or of any mixed languages arising from their contact
Derived forms
substrative (subˈstrative) or substratal (subˈstratal) adjective
Word origin of ‘substratum’
C17: from New Latin, from Latin substrātus strewn beneath, from substernere to spread under, from sub- + sternere to spread
Makers 8 Collective is a group of artists whose practice spans various disciplines – from jewellery to fine art, art as social practice to printmaking, each working in a variety of materials.  Struck by the diversity of the Crypt’s use over time, from a place of burial to air raid shelter to gallery, their exhibition explores and responds to site within the context and theme of Substrata, revealing the rich historical, architectural and geological diversity of the surrounding and ever-changing urban landscape.
Links:
www.makers8collective.com
@makers_8_collective
+ Google Calendar+ iCal Export