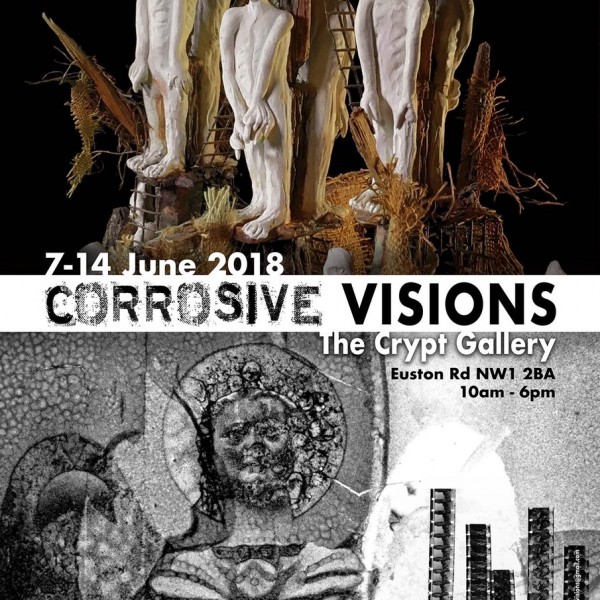 7-14 June 2018
Private View: Thursday 7 June 6 – 8 pm
Open Daily: 10am – 6pm
‘Corrosive Visions’ aims to reflect on and illustrate the past in the present, but always in conjunction with inevitable decay and change.
The Crypt is one of London’s most atmospheric exhibition places. Built in the early 19th century and almost untouched since that time it is constructed of the rough, harsh brickwork characteristic of that period. It is planned as a sequence of dark tunnels and hidden secret recesses, and this combination of features
makes the perfect setting for ‘Corrosive Visions’.

The show combines the works of two artists: the ‘Corrosive’ mordançage prints by Arepo and ‘Visions’ of sculptures of Julian Wootton.

CORROSIVE by AREPO
A collection of prints depict the ancient Tuscan city of Lucca, whose incredible state of preservation throughout history is almost surreal. The walls encircling the ancient town have remained intact since their foundation, even as the city has expanded and modernised. Its monuments still present a series of enigmatic sculptures and inlays whose masterful craftsmanship seems to challenge the passing of the ages.

VISIONS by JULIAN WOOTTON
Clay is the basic material with which Wootton works but many of pieces are also comprised of a mixture of media: wood, plastic, metal, cloth. Social and cultural production, literature and even film are also referenced in some of his sculptures. The Sphinx and Eloi, from H.G Well’s science fiction novel The Time Machine, Nosferatu’s Galleon, inspired by Werrner Herzog’s film and Klaus Kinski’s performance in it.