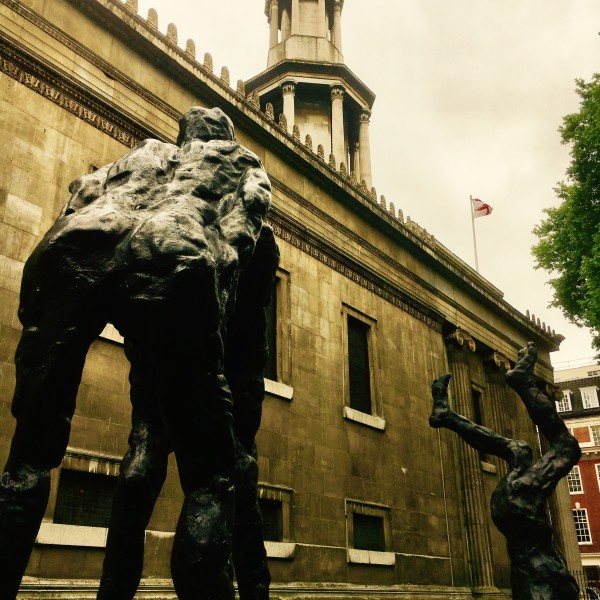 New sculpture installation in the church gardens at St Pancras- access via the front gate to the right of the main church doors. Gardens open officially 8am-6pm Monday -Thursday

An extension of the ‘Visitor’ series, Alien is a vast 6m tall work depicting a humanoid figure crash landed in the earth. It’s circling legs suggest that this a more permanent development as the figure struggles to free itself from the ground. “I have always been fascinated by the idea that we are not alone, that a massive Alien might suddenly land on earth. I wanted to capture the sense of wonder and shock that such an arrival would generate. Every new work of art is an Alien, an unexpected arrival. But I also think that an extraterrestrial being would look like us, but perhaps much larger or smaller. However, the title Alien also suggests something quite different: the difficulty of being an outsider. My father arrived in England from Vienna with his parents as refugees in 1938. My grandfather was interned as an enemy ‘Alien’, a great paradox given the reasons he had to leave Austria, something that my family often spoke about. Sometimes immigrants hide their true identity beneath the surface, like this sculpture. Many of my works, both paintings and sculptures, explore the theme of belonging or alienation. But with this work I wanted to use a vast, breathing human form to express the profound feelings associated with these themes. And I needed the massive scale to portray the intensity of these emotions.”

“This sculpture is a human arch, but the arch means something very potent: the joining of two minds. It is about connections such as brothers, siblings, partners, friends and joining strangers. It is an image of coming together, resolution and peace. But it also offers therefore a suggestion of symbolic meanings to every bridge or arch. Every arch is a symbol of connection and resolution.

For me Stonehenge is the ultimate sculpture and it has always influenced my sculptural work since I made a small copy of it as a student. Part of Stonehenge is a similar image of an arch, of two interconnected forms, with the connection the lintel. For me this lintel is a thought, a shared mind.

“I believe that it is only a matter of time until technology allows literal telepathy. A few generations ago the idea of phoning somebody thousands of miles away would have seemed like a preposterous fantasy, but now we take that, email and social media for granted. Distances between people that were formerly unbridgeable are now connected in less than a second. I want to express that miraculous element of modernity. Now is in many ways the age of communication.

“This piece is very human and physical. Clay and bronze are a media that equate human flesh. I have deliberately enlivened the surface so that each square inch of the massive surface is living and breathing. I have partly done this by having a dynamic and experimental treatment of human form that is far from being academic or depictive. I have deliberately allowed the spontaneous quirks in the maquette to come through to the full sized version without attempting to correct them. Part of the visual appeal will be that it appears to be both tiny and massive simultaneously as my maquette was only a few inches tall. You can still sense every fingermark in the tiny model but writ large. This piece is like a small thought or idea that suddenly appears before you. It is all about entering the consciousness of the viewer. I have found that if you maintain something of the intimacy of the original maquette in the large piece it is more effective and emotionally powerful.

“The two figures are brothers, partners. But they also suggest the idea that each person has two aspects: good and evil. I believe that every person has the capacity for both elements. According to the Talmud Adam, the first man, was double sided, he had two figures back to back, because he was created with two inclinations, a good inclination and an evil inclination. This idea has undoubtedly been an influence. I like the idea that when you communicate with another person you are also seeing a reflection of yourself, of your own humanity in another person. In the large version (unlike the maquette) I have used the same figure twice, each figure is identical to the other, a mirror image.

“My communicators, my brothers are communicating in a very physical and intimate way. I want the viewer to view the arch from underneath, to look upwards at this moment of communication because such a connection is a form of prayer or the expression of a hope that we can be understood by ourselves or another person; the image is a physical embodiment of the joining of minds. “I have personally textured the entire surface with thousands of marks and inscriptions, effectively painting in plaster. Included in this diorama of marks, words and ideas I wrote the names of multiple pairings of brothers throughout time, from the most archetypal Cain and Abel to modern brothers including my own and those of many others. You pass under the arch and see this graffiti, but it is not graffiti accrued over time by vandals, but part of the sculpture and its theme.”