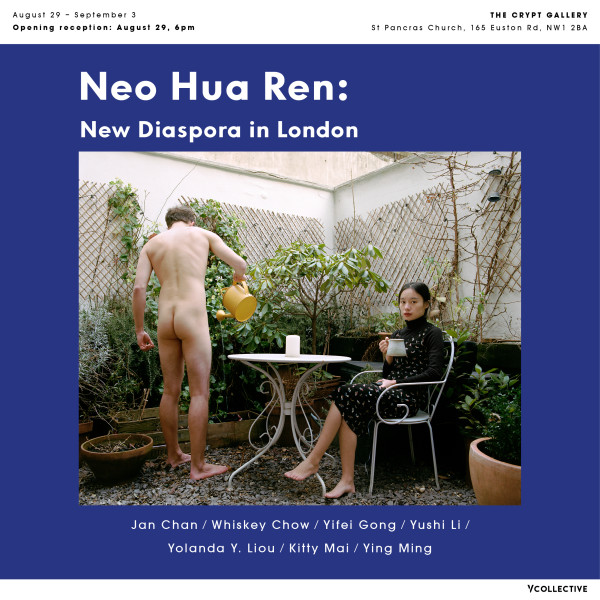 Open:
29 August – 2 September 10-6pm
3 September 10-4pm
Opening reception: 29 August  6-9pm
For more information please visit website www.neohuarenexhibition.com
Instagram @neohuarenexhibition
Neo Hua Ren: New Diaspora in London
August 29th – September 3rd 2019
Jan Chan, Whiskey Chow, Yifei Gong, Yushi Li, Yolanda Y. Liou, Kitty Mai, Ying Ming
We are pleased to present Neo Hua Ren exhibition, independently organized by T, D and S in partnership with V/COLLECTIVE creative agency. It showcases works by London-based young artists from Mainland China, Taiwan and Hong Kong. The show is a platform to promote undiscovered perspectives on the diaspora and its influence in the globalized world.
Hua Ren (华人) is a wide term representing overseas residents of Chinese descent, including those from Mainland China, Hong Kong, and Taiwan. The Chinese diaspora in the United Kingdom is fragmented and reflects a complicated history of drastic transformations experienced by the Asian world in the past century. Today, a younger generation, which has inherited the complexity of its origins, infuses it with a different approach formed according to the new reality: in the post-internet world, where everyone is ‘connected’, the concept of a separated, ethnicity-based community is questioned as a mode of living. The exhibition celebrates the openness and diversity of the participating artists. It poses questions: What does ethnic identity mean in a globalized world? Do the young diaspora still face adversity arising from the concept of ‘otherness’ and/or ‘Chineseness’?
How has the internet and the ease of technology brought about unexpected social complications?
The show aims to unfold a wider, more complex view on the contemporary life of the Hua Ren. Taking place in the Crypt of St Pancras Church, the show opens up a conversation between artists, who share their aesthetic and conceptual opinions through a variety of mediums. The surroundings of an Anglican church in the very center of London enhance the idea of immigration and complicated relationship between the city, steeped in tradition, and its inhabitants.
The Crypt, a basement space, structurally entangled and shaped as a maze, embodies a non-linear structure of the post-modern world, which the contemporary diaspora was formed in, and reveals different layers of narratives of the exhibition.
Whiskey Chow, who addresses cultural preconceptions of Chinese identity and female masculinity through her performances, inevitably engages with the concept of a female body in a suppressive environment: either Christian church or contemporary patriarchy. Being immersed in the video installation by Gong Yifei, the viewers see the familiar environment of a shopping mall as a dystopian setting and explore the notions of contemporary living: the concept of the private and the public, the self and the other, safety and surveillance.
Privacy as a vague intangible concept is addressed by J an Chan who creates ironic and playful photographs with the use of color and texture for the final imagery. The focus is shifted from society to an individual in the Selfie series by Kitty Mai . She uses ink and paper to produce works that reflect the post-digital era and the way human beings are influenced by new technologies.
A different side of living in the digital age is explored by contemporary photographer Yushi Li: she addresses questions of gaze and reversed gender roles, exploring male representation as an erotic subject in light of social media.
Yolanda Y. Liou experiments with the medium of photography and presents a wide range of works, showing her work as a fashion photographer, her artistic experimental photography with the use of different materials and a deeply personal research on the modern concept of beauty.
The exposition comes to an end with a large-scale installation by Ying Ming, who combines materials and techniques associated with traditional Chinese culture and contemporary aesthetics.
For press and business inquiries, please contact Tina: maslakova1t@gmail.com
+ Google Calendar+ iCal Export